Portugal is a place I have been wanting to go for some time.. it always retained a bit of an air of mystery to me.  It is not the first place that comes to mind when you think of Western Europe (that honor probably goes to France, Spain and Italy), so of course I was dying to explore it.  We had only one week, so I decided it was best to split that between two cities.. any more would have been too hectic although I am always tempted to want to cram more in. (Given a few more days I would also have visited Evora in the Alentejo region.)  So, my husband and I spent 4 nights at the beautiful Four Seasons Lisbon and 3 nights at the Intercontinental Porto, both Virtuoso properties.

Lisbon is an amazing town and actually reminds me a lot of San Francisco!  Both are built on hills (Lisbon on seven), both are prone to earthquakes (one in 1755 leveled much of Lisbon), both have a mild climate cooled by ocean breezes, both have cable cars (Lisbon’s are trams), Lisbon’s 25 de Abril bridge looks just like the Golden Gate bridge, both have great food, and both are located near wine-producing regions (Lisbon is one hour from Alentejo).

The Four Seasons is ideally located for a luxurious stay in Lisbon and is a 5-7 euro taxi ride from the main shopping and restaurant areas (Barrio Alto, Chiado).  Located at the top of the Avenue de Liberdade, a chic avenue lined with shops and hotels, it is about a 15-20 minute walk up from Rossio Square.  I loved the location as it was close enough to town but still in a quieter part.

I would definitely recommend a private walking tour on the first day to get yourself oriented with Lisbon.  It is a very hilly city, and actually uses several “elevators” to lift people straight up from one neighborhood to another!  I was grateful for the walk with our wonderful guide Gloria, which helped us understand the layout and feel better about walking around ourselves the following days.  We spent another full day at Sintra/Cascais/western coast.  This CAN be done in a day- albeit quickly!  It is quite fast with a private driver as Sintra is a bit spread out and would take some real plotting to go over train/bus routes and how to get from point A to B.  Basically, if you have time you could do it, but we were more pressed for time and wanted to see more all in one day, so the driver was perfect.  The third day, we spent the morning in the suburb of Belem and the afternoon wandering Lisbon again.

Chafariz do Vinho Enoteca – small, local tapas place in a 19th century bathhouse, just north of Barrio Alto.  I liked it because there were only 8-10 tables and no other tourists in there.

Lux – one of Europe’s hottest nightclubs, part-owned by John Malkovich.  It is on the docks across from the Santa Apolonia train station, and word to the wise.. if you arrive before 2am, you may be dancing alone.  Honestly, we had just flown in at 5pm, on very little sleep, but this club is only open Wed-Sat, and our stay was Sat-Tues, so we had to go try it.  We really were too exhausted to stay too late, but we arrived at 12:30am and got a couple cocktails in.. People were flooding in as we left, so I can only imagine what Lux is like when the sun is rising..

A Brasileira – opened in 1905 and is one of the oldest and most famous cafes in Lisbon.  Stop in for an espresso mid-afternoon to admire the interior and power you through the rest of your touring.

100 Maneiras – cute restaurant in Bairro Alto, casual upscale, has a set tasting menu every night with creative takes on international cuisine, all fresh from the market.  Reservation recommended.

Silk Nightclub – in Bairro Alto, unmarked door, quite exclusive!  Top hotels can get you a reservation, as the Four Seasons did for us.  I was curious to check it out, though it is probably not for everyone, so after 100 Maneiras we went there for a nightcap.  The interior is small and smoky, but people go for the outdoor rooftop patio!!  It has an amazing view over Lisbon, the Alfama and Sao Jorge castle beautifully lit up at night.  If you can get in, go for a pricey drink on the patio and then move on.

A Ginjihna – tiny bar off of Rossio Square (northeast corner) famous for the cherry liquor of the same name.  There are no tables, chairs, or room to stay.  Simply walk up, get your tiny plastic cup of ginjihna, and go about your day!

Tasca do Chico – tiny fado bar in Bairro Alto.  They have shows on Monday and Wednesday nights, and a serious crowd gathers at the door waiting to be let in between seatings.. The walls are covered in pictures, memorabilia, and there is no stage.. the singers just kind of make a small spot for themselves in front of the bar patrons sitting at wooden tables.  We met an American girl living in Sweden who saw this place on Anthony Bourdain, but had we just stumbled upon it while wandering Bairro Alto one night.  As you may suspect, this is sometimes the best way to find great little local spots.  Small, authentic, loved the fado.

In thinking of how else to describe my trip and this beautiful country, I will explain in terms of my “perfect vacation”.  This trip for me will generally involve a combination of history, food/wine, sun, and culture.  So here is how Portugal (specifically Lisbon in this post) measures up:

1) HISTORY: I learned even more about the importance of Portugal in maritime exploration in the 15th century. Vasco de Gama set out to discover a route to India in 1497, and Bartolomeu Dias, just before him in 1488, rounded the Cape of Good Hope off the southernmost tip of Africa. They are only two of the more famous explorers whose voyages helped coin the period known as the Age of Discovery, which allowed Portugal to reach the pinnacle of its growth by becoming a world trading power. The Jeronimos Monastery and the Discoveries Monument were built to honor these explorations, and in fact, Vasco de Gama remains entombed at the Monastery.

2) FOOD/WINE: Portuguese wines are quite delicious! We had many table wines from the Alentejo and Douro regions with our meals, and of course the PORT is wonderful! (More on that later). There is also a wine called vinho verde, or literally, green wine, which is actually a very light almost-sparkling white wine that is best enjoyed at lunch or on an afternoon break. The most ubiquitous item found on menus is bacalhau, a salted codfish. I think the Portuguese know about 187 ways to make codfish, all of them delicious! Of course you cannot leave Lisbon without sampling the famous pasteis de belem, a Portuguese egg tart pastry. The original is at Antiga Confeitaria de Belem, right by the Jeronimos Monastery. (The suburb of Belem is 10-15 minutes from Lisbon and deserves at least a half day to explore!) Lines form out the door, but there are plenty of tables inside at which you can enjoy your tart, preferably with a bica (espresso). Thankfully there are many hills to attempt to work off all the glorious calories you will consume here..

3) SUN: The beach areas of Cascais and Estoril are just west of Lisbon, about 20-30 minutes away and are lovely. We drove through them, but unfortunately a rare cold snap at the end of April meant we really couldn’t enjoy them. I did, however, walk across the sand at Cascais and have a famous Santini ice-cream, so I just closed my eyes for a moment and could almost feel the warm sun on my face and hear the sounds of a beach full of fun-loving couples and families.. (Also, Portugal has the famous Algarve coast at the southernmost part of the country.. famous for golf courses and family-friendly properties, this area is especially popular with the British on holiday.)

4) CULTURE: Fado music is definitely unique to the Portuguese! These melancholy, often wistful, songs were first sung by sailors (see: HISTORY) headed out to sea, unsure if they would ever see their loved ones again. Today, fado is very much alive and well and sung in fado houses all across Lisbon. There are larger ones, which have a dinner and show, and also smaller, more intimate bars.. many in the Barrio Alto neighborhood, a great area for restaurants and nightlife.  We went to both types of shows, and I personally prefer the bar for a more personal experience.  I also learned how much I love azulejos!! Azulejos, or tiles, were first introduced by the Moors in the 15th century and became part of Portuguese decorative style, as well as functionally cooling homes. The styles evolved over the centuries, often depicting daily life, and were put everywhere! Floors, walls, facades of buildings.. I was so fascinated that the first place we went in Lisbon was the Museu do Azulejos. That’s right- a museum dedicated to the craft and evolution of Portuguese tiles. A couple of outstanding places to see tiles are actually in and around Porto.. the Sao Bento railway station in Porto and the Pinhao rail station in the Douro Valley- more on those in another post! 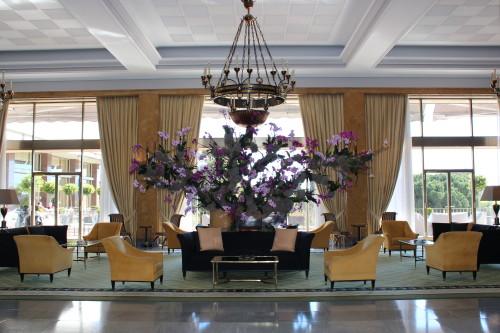 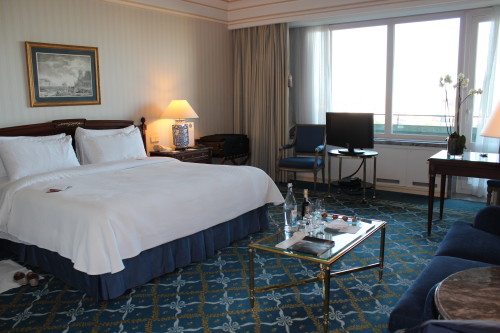 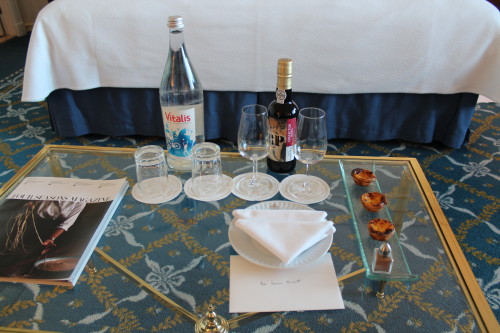 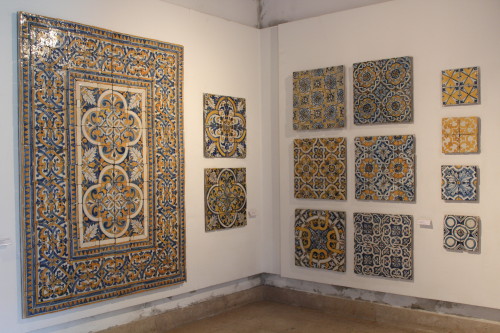 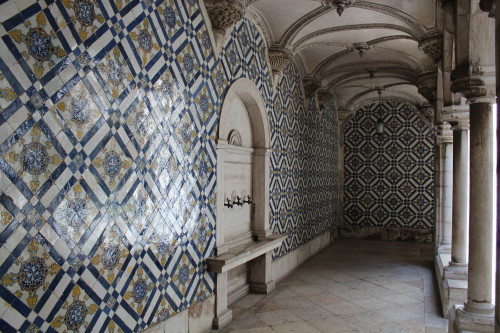 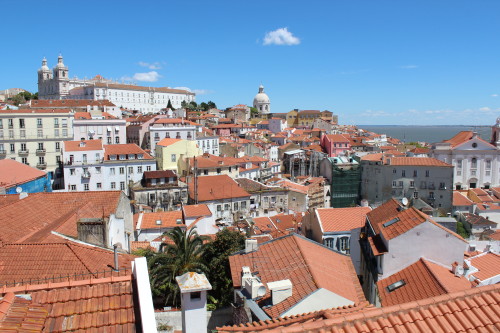 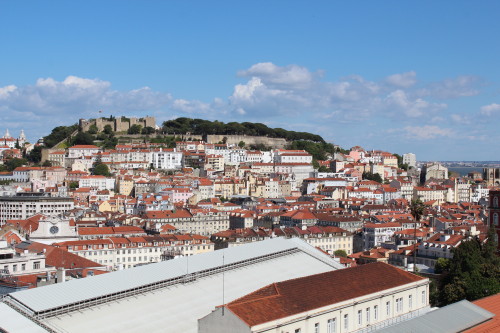 View of Sao Jorge Castle in the Alfama, Lisbon 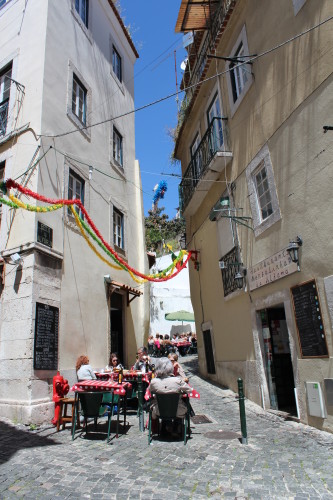 Alley restaurant in the Alfama where we enjoyed a delicious lunch of bacalhau and vinho verde. YUM! 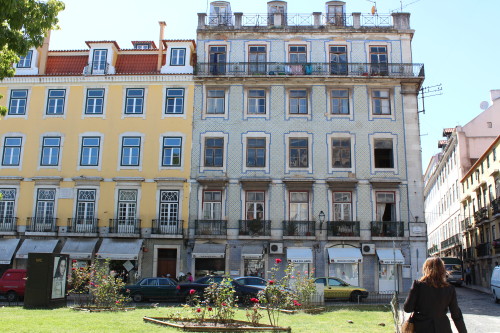 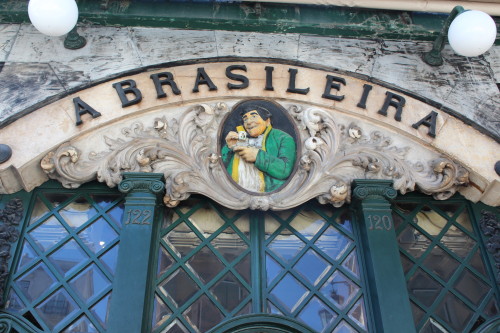 A Brasileira cafe in Chiado 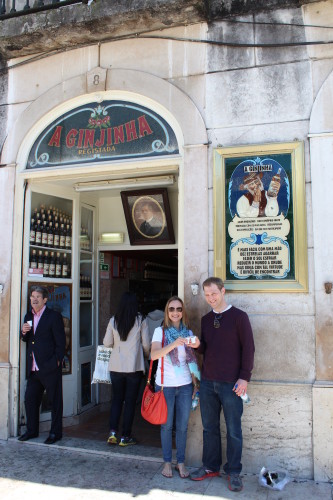 A Ginjinha.. the famous bar where only the cherry liquor is served. In plastic cups, with no tables or chairs.. you simply walk up, get your shot, and go about your day. 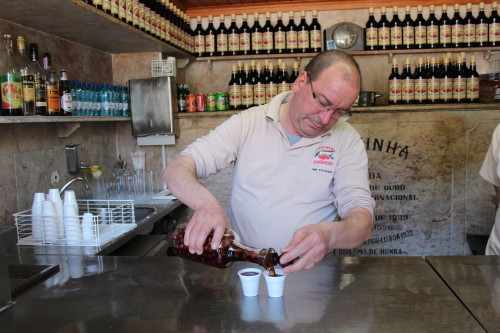 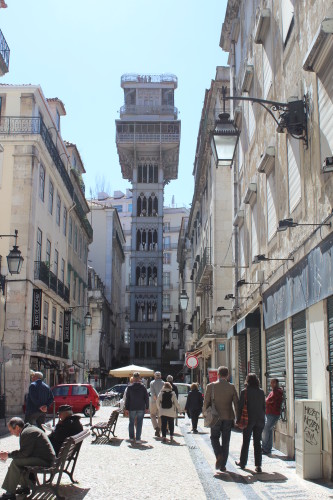 Elevator de Santa Justa which whisks you straight up from the Baixa to Chiado. You cannot see in the picture, but there is a platform in the back that lets you out to Chiado. 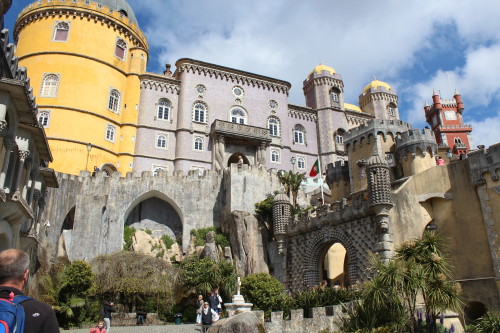 The majestic Pena Palace at Sintra 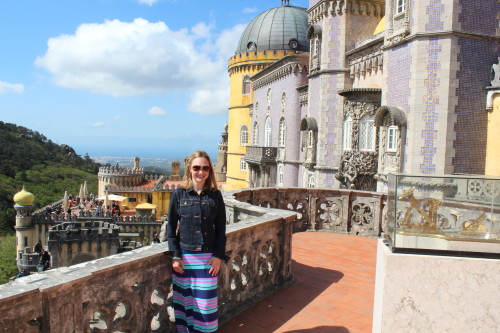 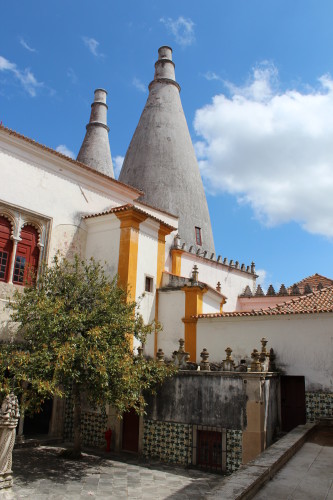 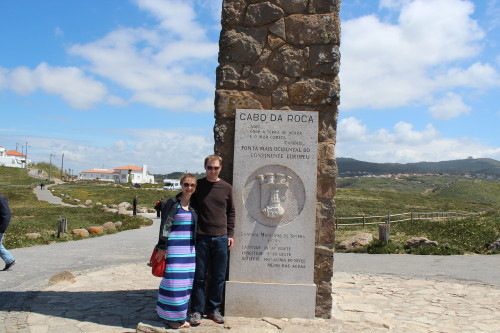 Cabo de Roca.. the westernmost point in EUROPE! It was a tad. bit. windy. Coastal winds whipping my hair into a frenzy! 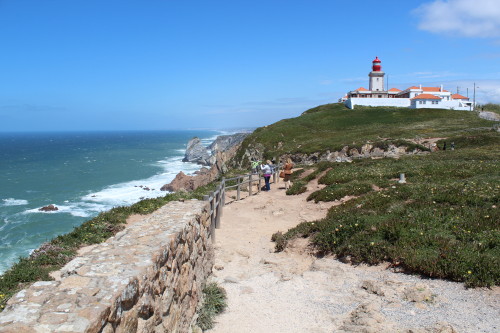 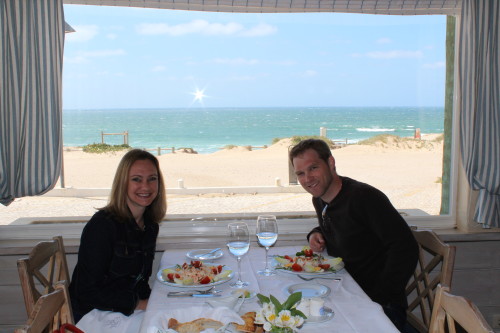 Porto de Santa Maria on Guincho Beach.. one of the nicest restaurants in all of Portugal.  We enjoyed seafood salads for lunch here while continuing our way around the coast with our private driver/guide. We did Sintra, the western coast, and Cascais all in one day.  Too bad it was too chilly to swim, but the beaches are pretty! 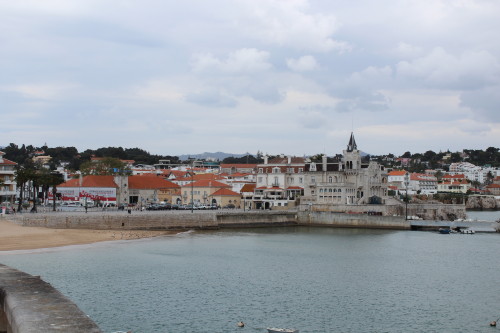 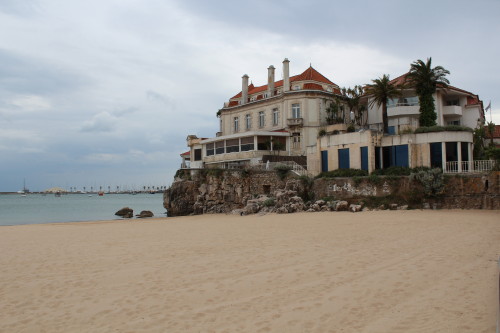 Hotel Albatroz in Cascais.. what a great location on a pretty beach! I imagine this area is packed in the summer. 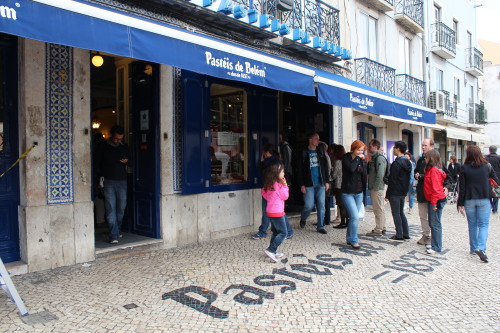 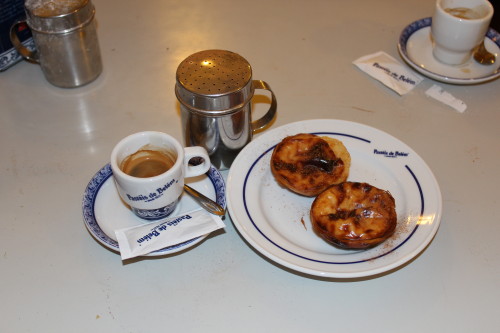 Pasteis de Belem with espresso.. a must-do in Lisbon! 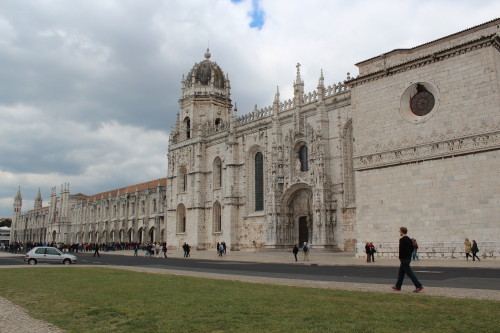 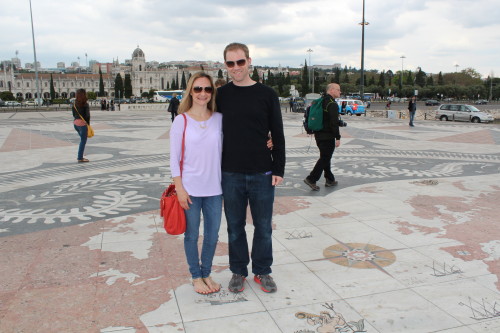 Wind Rose at the Discoveries Monument with Jeronimos Monastery in background.. all in the neighborhood of Belem. 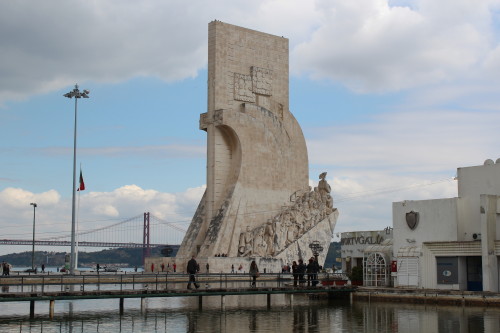 Discoveries Monument.. a nod to the great Portuguese maritime explorers of the 15th and 16th centuries 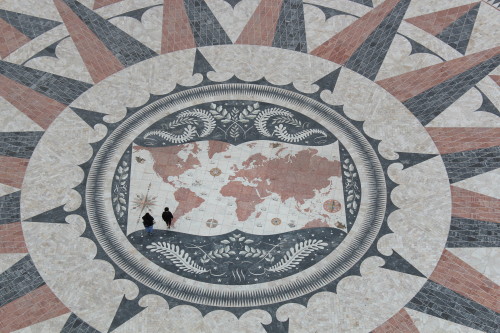 Wind Rose from waaay atop the Discoveries Monument. 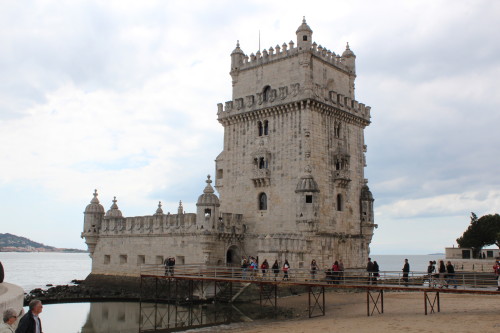 Torre de Belem, one of many fortresses originally built to protect this coastline from invaders and pirates